Best Practices for Bringing Solar to Your Airport

Given airports’ busy operations and ample parking lot, roof, and occasionally open land, solar is more often than not a viable option for reducing energy costs. In the past few years, we’ve developed, designed and built solar projects for Sacramento International Airport and San Diego International Airport. Based on these experiences, our project development, engineering and operations teams have developed a long list of airport solar best practices – as well as a list of pitfalls to avoid.

I’ve culled the best advice from our teams here in hopes that these tips will help you in a successful solar or energy storage project for your airport.

Solar can be built on the roof of most airport buildings, on parking lots as carports or on adjacent land, as either fixed-tilt or tracker arrays. Choosing a system type starts with looking at the site or facilities characteristics and limitations.

Roofs present the fewest challenges because they are already part of a built environment, making them exempt from the California Environmental Quality Act (CEQA) or National Environmental Policy Act (NEPA) assessment processes (more on that below). While the exemption is also true for parking lots, building on roofs doesn’t usually impact airport operations to a noticeable degree. There are unique considerations to take into account with roof-mounted arrays, such as whether the roof can handle the load or if there are plans to for future building expansion or future rooftop equipment.

The second least complex option is building elevated solar support structures in parking lots. Improvements in technology and system design have significantly brought down the cost of carport solar systems making it a comparable choice to roof and ground-mount. In addition to being exempt from CEQA/NEPA assessment, solar carports provide the added benefit of shading cars and providing power for integrated EV charging stations. With parking lots usually being in surplus at airports, solar carports are a perfect way to increase lot utilization (and thus parking revenue).

Ground-mount solar has historically been the most economical choice for large energy users. With improvements in technology, that’s no longer the case, but they still do offer the best option for many airports that lack roof or parking lot space. A 2014 NREL report estimated that there are 816,930 acres of assumed idle grassland within the 2,915 significant airport properties in the United States. Assuming that 7 acres of land could host 1 megawatt (MW) of fixed-axis solar PV, the report authors concluded that there’s potential for 116,704 MW of solar on idle lands at airports in the United States. 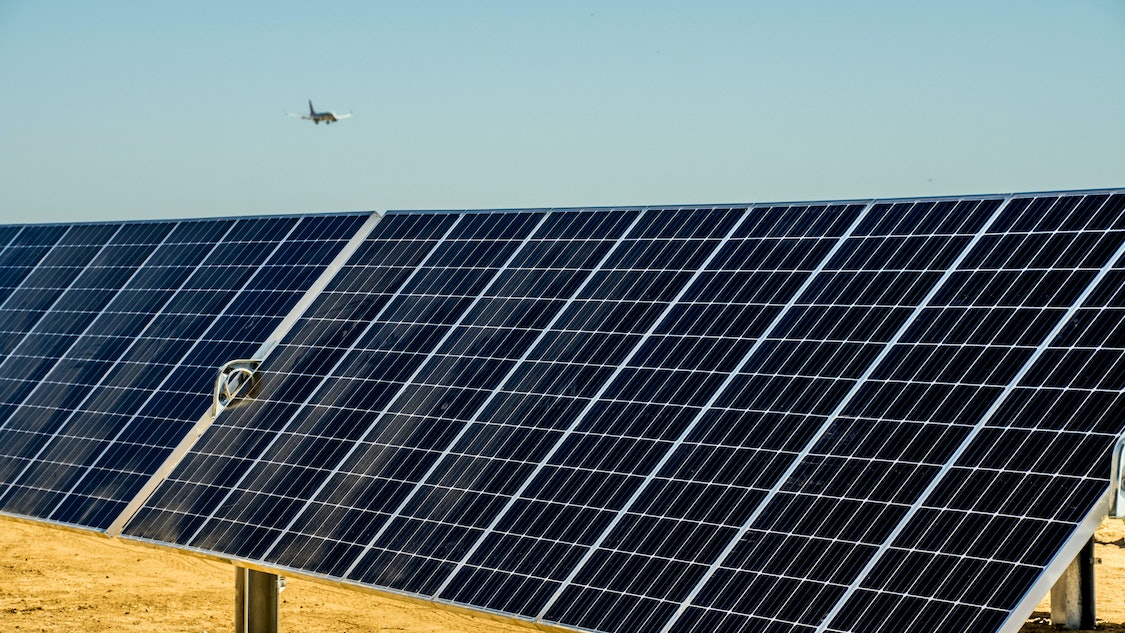 The main reason ground-mount solar is the most challenging among the three options is due to the required CEQA/NEPA environmental assessment process. The need for CEQA/NEPA may also depend on whether an airport has master development plans. This is an important and necessary process but typically adds months onto the project timeline and can stop some projects in their tracks.

As energy storage has become economically viable, one of the most common concerns we get from customers is where to site it. An energy storage unit is much more contained and smaller than most assume it will be. A 100 kilowatt system is around the size of a standard equipment closet, while a 1 MW system is the size of a shipping container. The systems can be sited strategically to not impact operations or access.

The solar proposal process doesn’t have to be overwhelming. However, assessing whether a solar firm is the best partner for you doesn’t just come down to price. My colleague, Chris Otness, recently authored an informative guide on effectively assessing proposals; after all not all proposals are able to be compared apples to apples, especially for something as complex as an on-site solar solution.

Generally, you want to start by making sure that you’re getting proposals from firms that have completed an airport project before or at least a solar project of a similar scope. We’ve seen some airports choose to work with a consultant, while others don’t — it’s up to your leadership. We recommend putting together a committee made up of key internal stakeholders/decision makers, relevant local municipal leadership and a representative from your local utility to review proposals and be part of the firm selection process. 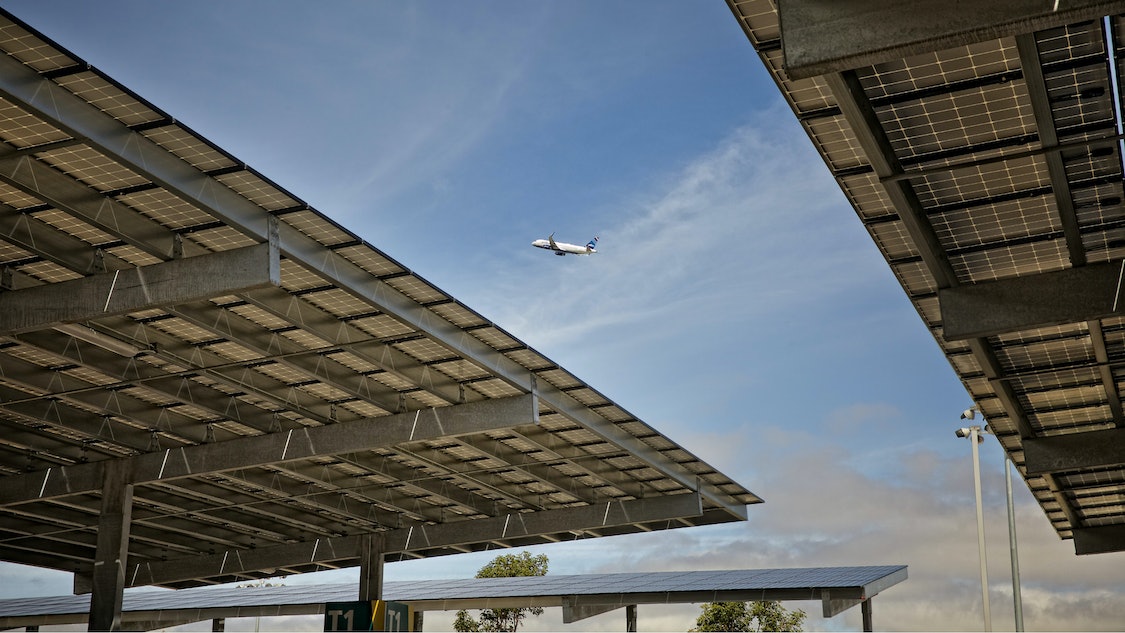 Another aspect of choosing a solar firm if you’re considering a financed system is making sure you understand how the proposing firm is structured. For example, Borrego Solar doesn’t provide financing ourselves. We bring in a financing partner that provides the best economics and is matched for your risk profile and goals. We encourage airport leadership to solicit references both the primary solar firm contractor as well as potential financing entities as both are critical to a project’s success.

Furthermore, an important and often undervalued aspect of the proposal review process is speaking with the aforementioned references. You can learn a lot by speaking with a company’s previous customers. Here are some key characteristics we recommend you assess during this stage.

Communication
Determine whether their key contact or contacts throughout the project life cycle were responsive and knowledgeable. This sets the tone for what you can expect from the culture of the company. These projects are complex and knowing that you can trust the project team to effectively communicate with your internal team will materially increase project velocity and decrease risk.

Project team is comprised of decisionmakers
You want to partner with a firm in which the project team is comprised of at least a few decision makers or there is a direct line to decision makers. This ensures that when problems arise, solutions can be implemented quickly, that there is expertise to back proposed solutions and that the team is authorized to think outside the box and to implement creative new approaches.

Team integration
The strongest vendors typically bring both an experienced in-house team, typically consisting of project managers and engineers, and combine this with a proven team of key subcontractors that they’ve utilized many times over. For example, if a vendor is specifying a set of new and unproven subcontractors because of a low price point, your project may bear the brunt of lessons learned rather than being the beneficiary of previous experience. On the other hand, if the vendor can utilize a combined team of highly experienced subcontractors,with electrical and mechanical being the most important, the project will proceed more smoothly. 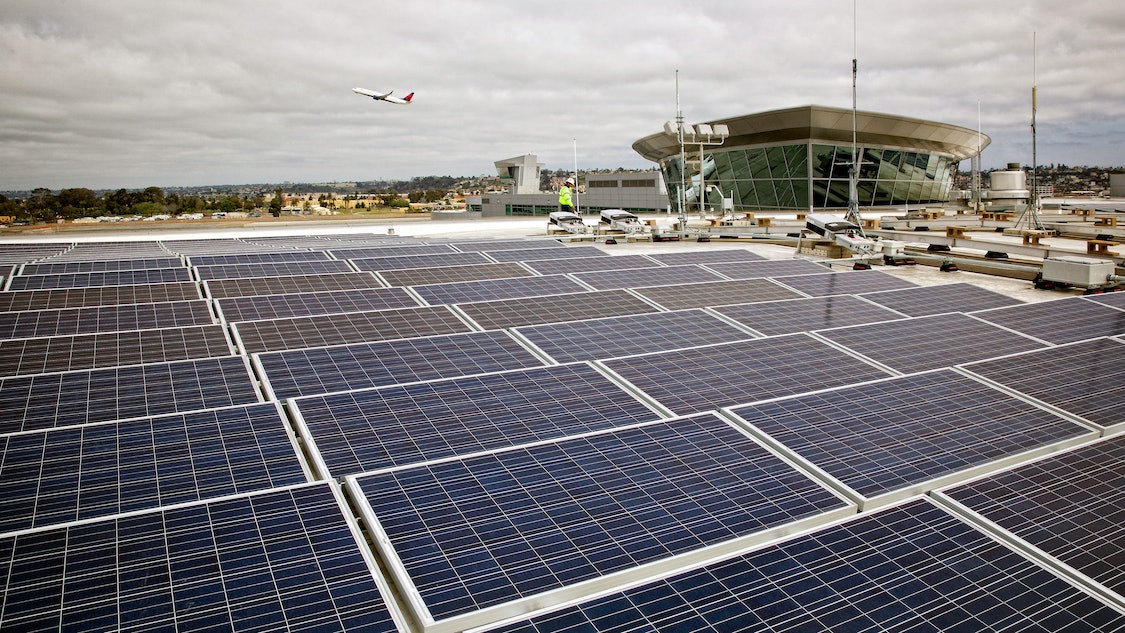 There are two project elements that can apply to your airport solar project.

Glare Studies (FAA 7460 forms)
The FAA requires glare studies to be performed for any type of solar project at an airport or in close proximity to an airport. These studies will need to be updated throughout the project life cycle if there are design changes.

Environmental Review
For ground-mount projects in previously undisturbed spaces, CEQA/NEPA assessments must be performed to determine if there will be any negative environmental impacts from the project based on defined criteria. For CEQA, once the assessment is complete, there may be required mitigation measures for habitat and species protection. The lead agency from the local AHJ (Authority Having Jurisdiction) will typically manage the overall CEQA process. It’s possible that they’ll have a biologist on staff conduct the review or they may utilize a consultant. The findings then go up for public comment where anyone can oppose the project from moving forward. After the public comment period, the results are incorporated into a larger Environmental Impact Report and provided to the board of the lead agency to make a final decision. For our Sacramento Airport project this process took about 4-6 months.

Because airports are regulated by the FAA, a NEPA assessment also needs to be be conducted, which is largely the same as CEQA. However, there are more points at which the FAA has to review and give feedback. This creates a much longer time frame than CEQA and is prone to delays because of the FAA’s long lead times for their review at multiple stages.

Designing and interconnecting airport solar energy systems means a solar firm must contend with medium voltage loop architecture. These frameworks aren’t unique to airports — they are also employed for other large energy users such as college and corporate campuses — and their inherent properties add both resilience as well as complexity. When integrating solar power into these loops, it’s necessary to carefully follow the applicable utility rules, as well as NEC requirements, to ensure that there is no potential for an electrical overloading scenario. Siting of the interconnection point is more complex, because the solar must be integrated onto the grid downstream from the utility service. If it’s not possible to shut down power when constructing the solar installation, a backup power generator must be deployed.

There is added complexity when constructing solar on these types of electrical infrastructure, but these challenges are manageable for an experienced installer. Bringing in a utility representative early can help avoid unforeseen issues with interconnection.

While many airports have traditionally financed their solar energy systems through a power purchase agreement (PPA), there’s another option to consider: Tax Exempt Municipal Leases (TEML). A TEML is similar to a capital lease but as the name suggests, it is only available to tax-exempt entities. It is similar to a capital lease because the airport would be the system owner and the financing would be on balance sheet. TEMLs provide much greater savings compared to a PPA and airports are able to own the system. With a TEML, as opposed to a PPA, the airport would need to procure its own operations and maintenance provider, but some solar firms, like Borrego Solar, provide this service.

Five California Public Sector Solar Programs You Should Know About

It’s easy to see why California’s public sector has been at the forefront of solar and energy storage adoption.…

Recent years have seen massive price declines in battery technology coupled with generous incentive programs in some markets. As…

The prospects for solar power in Maine have never been brighter. Thanks to a new clean energy-friendly governor, Janet…