America’s Top Executives Have Solar on Their Minds

America’s most recognizable brands are leading the way in corporate solar adoption. Top companies such as Target, Walmart, Costco, Amazon, Intel, FedEx, Verizon, L’Oreal, Microsoft, and General Motors are all saving on energy costs, delivering more value to their customers, and reducing harmful carbon emissions and pollution by investing in renewable energy. At Borrego Solar, we have designed and built 218 MW of solar rooftop, ground-mounted, and carport systems for a wide variety of private sector energy users including Apple, EMC Corp, Johnson & Johnson, and Williams-Sonoma.

A key factor in the rapid growth of commercial solar is the significant decline in system pricing. Prices have fallen 73% since 2010, and non-module hardware costs continue to decline. There have also been changes to incentive programs in key states such as California and Massachusetts, growth in financing opportunities, and increases in corporate procurement of off-site projects. All of this has led to a consistent growth in average system sizes for projects.

Solar as a sound business strategy

The benefits of procuring solar energy go far beyond cost savings. Many Fortune 500 companies are including renewable energy in their business strategies and setting bold clean energy goals. For example, Microsoft is expanding their renewable energy portfolio so it can build a global cloud and better serve clients. Target has pledged to power its operations with 100% renewable energy, making a strong financial case for managing expenses, reducing energy consumption, and easing demands of the local grid.

Companies going solar are aligning their climate strategy with solid business decisions. Campbell Soup Company has a long-standing sustainable business strategy that contributes directly to its bottom-line. Campbell recently installed a system that produces more than 5 million kilowatt hours of solar energy at its headquarters, which is expected to provide enough electricity to meet around 20% of its electricity demand annually. The solar installations are driving cost savings for the company, while also benefiting the local community and showcasing a commitment to environmental stewardship to its customers.

The growth of cloud-based services, electric vehicles, the Internet of Things (IoT), and innovation are all driving energy demand upward — forcing technology companies to take a more serious look at the costs they spend on electricity. Notably, Microsoft is using nearly as much electrical power as a small American state. The company has committed to using 60% renewable energy to power its data centers by 2020, with a longer term goal of running their data centers entirely on renewable energy.

Several technology firms are taking action to reduce costs and environmental impact, which can be seen by a surge in 2017 solar installations. For the first time, Amazon made it onto the list of Top 25 overall corporate users with at least 17 MW of onsite solar installations in 2017. Facebook added at least 10 MW of onsite solar to power data centers in New Mexico, and Intel installed at least 7MW of new solar in 2017.

Apple ranks #4 among the top 25 corporate users by installed solar capacity, with over 101 MW of solar installed and an additional 14 MW installed in 2017. Apple’s solar production includes an onsite solar array at their corporate offices, designed and built by Borrego Solar. 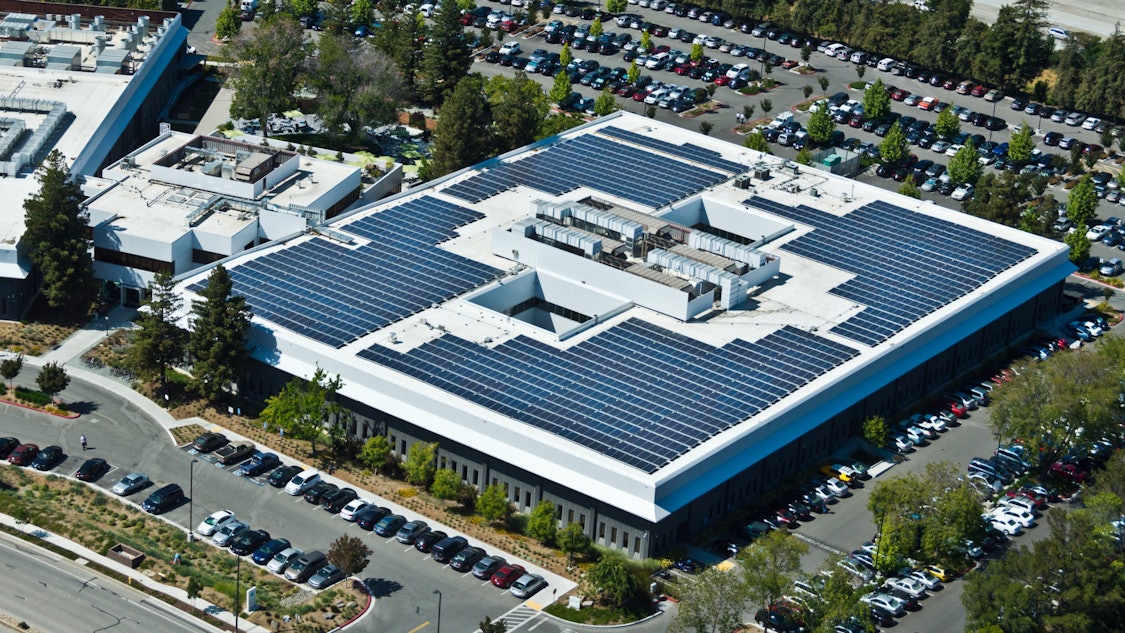 Tech companies are also investing in off-site solar, in part to offset the growing demand from their data centers. Facebook contracted for three new 10 MW projects in New Mexico. Amazon Web Services contracted for 260 MW of solar in Virginia. And Microsoft will purchase 315 MW from two solar facilities in Virginia.

The retail sector represents the largest adopter of solar capacity and greatest number of installations at both large retail centers and smaller building footprints. Target already has roof-top solar at 436 of their locations, with a plan to increase that to over 500 locations by 2020. Borrego Solar designed and built a solar array at a Bay Area West Elm store that will provide 15% of the facility’s onsite energy needs. 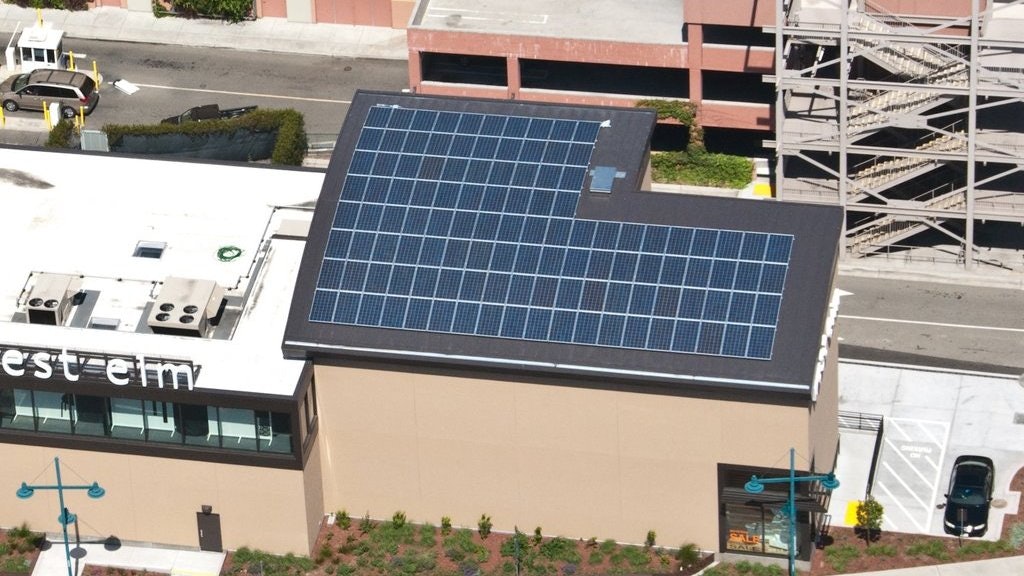 Owners of distribution facilities, office buildings, and warehouses are also leading adopters of renewables. These companies are able to monetize their large building footprints and flat roofs by installing solar. Coast Citrus Distributors, a San Diego-based wholesaler of fruits and vegetables, wanted to save money, improve operations, and mitigate the long-term risk of rising energy costs. They worked with Borrego Solar to design and build a 622 kW roof-mounted solar array on their headquarters that is expected to supply supply 55% of their energy needs and reduce 30% of their electrical costs with rooftop solar. Borrego Solar also installed 1 MW of roof-top solar at their Los Angeles distribution facility. 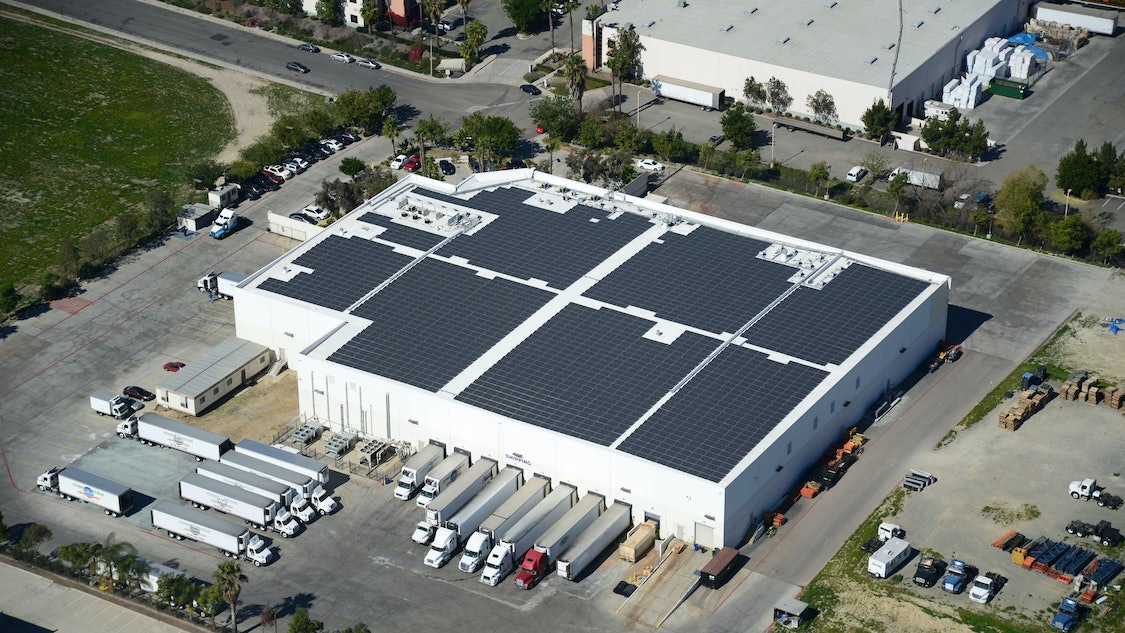 Rooftop systems currently make up the majority of private sector solar installations given most companies’ urban locations. However, for companies with the space or located in a market where off-site solar is an option, ground-mounted systems should also be considered. They can be sized to meet a specific energy demand amount, versus accommodating a system design and size based on space, access, or shading limitations of a roof. For Johnson & Johnson, Borrego Solar used empty land adjacent to their building to design and build a ground-mounted array that is expected to offset 40% of their energy needs at their corporate office headquarters. 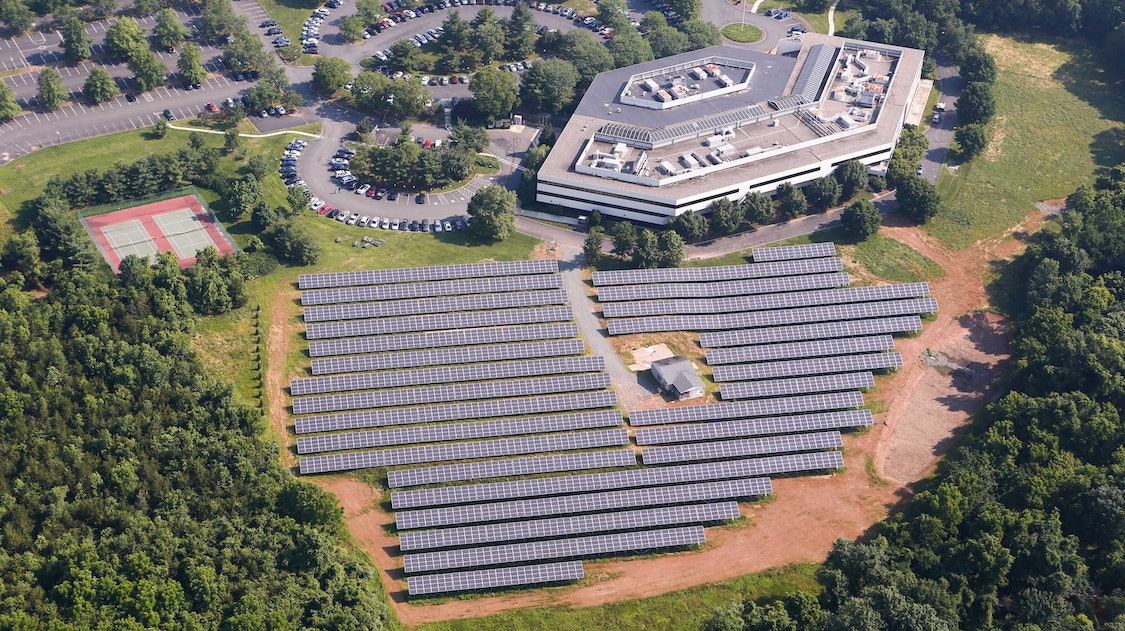 Corporate procurement of large off-site projects is growing, and is expected to continue not only as a result of businesses becoming more familiar with it as an option, but also as more markets enable this kind of net metering arrangement. Off-site projects enable companies to offset a larger portion of their demand and benefit from economies of scale by building larger projects than their sites allow. In some markets, companies can share in multi-party financial arrangements and PPAs at off-site projects. Walmart recently completed a 56MW off-site solar project through utility Alabama Power. Microsoft, Facebook, and Amazon Web Services have all invested in off-site solar.

As costs of energy storage decline, companies are looking at storage technology as the next phase in reducing energy costs. Energy storage enables customers to lower their peak demand, optimize their time-of-use rates, and reduce capacity charges. Target is already looking forward at energy innovation, embracing storage as a way to not only increase their renewable energy consumption, but also to improve their resiliency at locations in their climate-impacted communities. For more on energy storage, download our guide here.

As we look to America’s top private sector solar energy adopters, we can glean some best practices other companies can learn from:

– Apple continues its momentum towards 100% renewable energy at its corporate facilities and data centers. Apple is investing in their own onsite energy production, establishing relationships with suppliers to procure renewable energy to reduce their energy needs even as their employee base grows.

– Microsoft is procuring increasing amounts of solar energy to meet their bold clean energy goals. The company is optimistic about solar and are working with partners and utilities to leverage their buying power to bring more clean energy to the grid.

– Target, by far the top corporate user by installed capacity and number of installations, is sending a strong signal to the energy sector by working with peers, utilities, other retailers, and leading companies in their shift to 100% renewable energy.

Recent years have seen massive price declines in battery technology coupled with generous incentive programs in some markets. As…

California is the top state for solar installations, with nearly 20% of its electricity already supplied by solar and…

Solar has come full circle. At least it appears that way after listening to some of the largest companies…