Solar is The Most Popular Energy Source & Other Key SPI Takeaways

According to a recent poll released by the Global Strategy Group and Solar Energy Industries Association (SEIA), solar is the most favorable form of energy across all political parties.

There is wide support for renewable energy portfolio standards, net metering, pro-solar policies, and government programs that encourage both large and small-scale solar energy. And more than 75% of voters across all party lines favor more investment in solar energy by their electric utilities.

Solar is seen as a clean, non-toxic source of emissions-free energy that will improve air quality and lower the health risks associated with other forms of energy. Polling also shows that respondents like solar because innovation in solar technology is creating jobs and economic growth, and because the significant drop in solar prices have made it more affordable for all Americans.

These insights were announced in September 2018 at Solar Power International (SPI), one of the industry’s largest events that brings together more than 20,000 professionals working in solar energy, storage, and renewable energy.

This year’s SPI was held at the Anaheim Convention Center which is powered by a 2.4MW rooftop solar system installed by Borrego Solar. The Borrego team kicked off SPI by joining the City of Anaheim and a handful of SPI attendees on a private tour of the rooftop to showcase what 300,000 square feet of commercial solar looks like from the top. 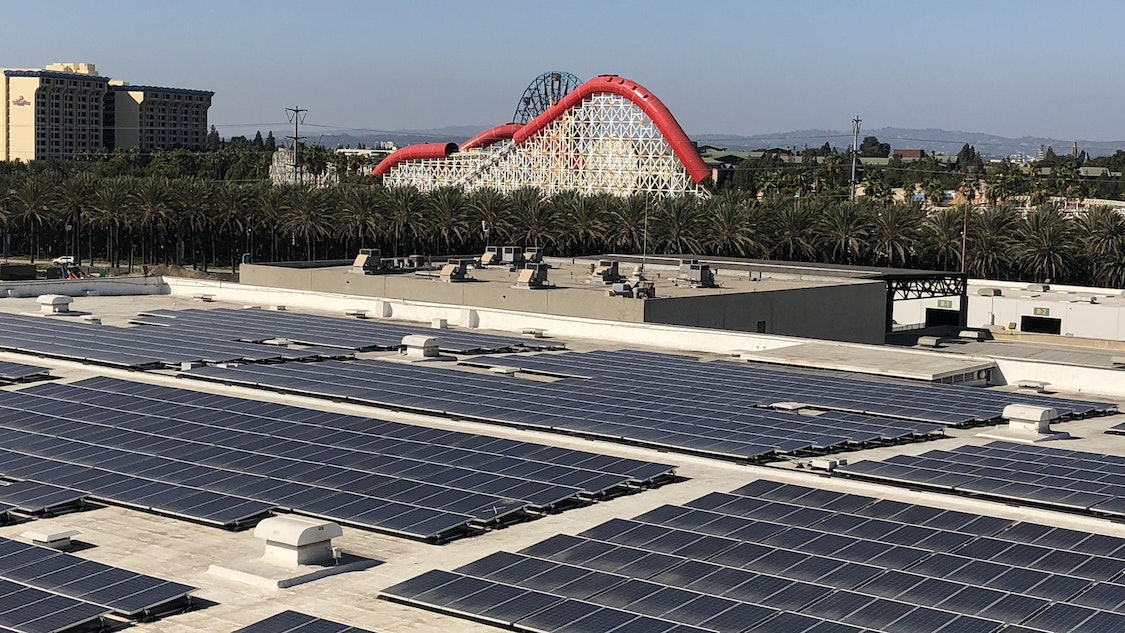 During SPI, many panelists echoed a common belief: the public’s growing support for solar is one of the drivers in the decision for businesses and public agencies to install commercial solar. Across all industry segments, there is increasing pressure to include solar in their energy mix – and many companies are starting to incorporate solar into their business & sustainability strategies.

In a business roundtable about commercial and industrial solar, a mix of C&I buyers talked about how they approach solar within their organizations. Graham Bowen, the Assistant General Manager of Power Supply for the City of Anaheim, emphasized the City’s goal to offset 100% of their energy needs with renewables by 2045 because there is strong resident and City Council support for becoming a green city. Even though the city will need to look regionally, outside of Anaheim, to meet its 100% renewable goal, the Council is committed to installing solar carport structures at all the city’s elementary schools because schools provide visibility for the community and – most importantly – show the students how renewables benefit their community in a tangible way.

Likewise, in the San Francisco Bay Area, the Bay Area Rapid Transit (BART) system has installed solar carport structures and a growing number of electric vehicle (EV) charging stations at several of their stations. These have been wildly popular with riders, and BART’s leadership board knows that it is important to install these, where feasible, so its customers can see the technology in use. BART is looking at installing offsite ground-mounted solar to achieve their bold 100% renewable energy goals.

In the sports entertainment industry, AEG Worldwide has installed onsite solar at several of its stadiums and sporting venues. For more than ten years, there has been a top-down initiative to not only save money, but also promote their organization as a green and sustainable business. The company promotes the onsite solar in their customer messaging and feels strongly about giving visibility to renewables because their sports attendees largely support solar.

The beauty product manufacturer L’Oreal also heavily communicates its sustainability goals to customers as part of its overall marketing and brand messaging. The company has a strong corporate directive, from the top down, to become carbon neutral. The company led an effort to offset 100% of its energy needs with roof-mounted and ground-mounted solar at its plants in Arkansas and Kentucky, states that didn’t previously have a lot of solar.

In a different session at SPI, panelists talked about the direct economic value of making solar more visible to consumers. They gave compelling examples of ways businesses are using customer awareness to enhance their reputation and add value. One big box retailer with non-visible rooftop solar installed solar trees to create a shaded area for customers. Another business that gets much of its energy from an offsite ground-mounted solar farm installed solar carports onsite for employees and visitors. A utility in Florida asked customers to request participation in solar and received an overwhelming response that far surpassed its expectations.

The consensus among panelists was that businesses can gain a “return on visibility” by tapping into the tremendous emotional appeal of solar and making sure that customers, visitors, and employees see solar in use. We recently created some best-practices guidelines for companies that are installing solar on their corporate campuses, a very visible show of adopting renewable energy. 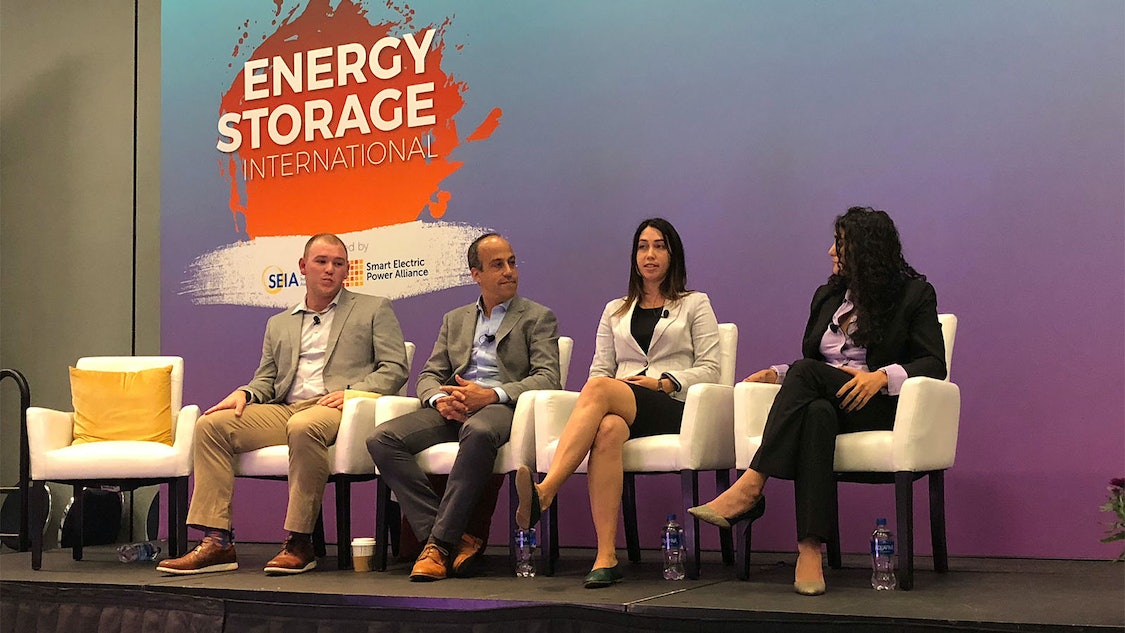 Solar Has Opened the Door for Energy Storage

Dan Berwick, Borrego’s General Manager of Energy Storage, spoke at SPI in a session about behind-the-meter (BTM) energy storage systems for commercial & industrial customers. At Borrego Solar, energy storage is part of our comprehensive set of end-to-end services to help our business and public sector customers achieve their renewable energy goals. And it’s increasingly the case that customers are asking about energy storage as another way to be even more sustainable.

A greater cross-section of commercial energy users are now looking to energy storage as another option for their renewable energy portfolios. In recent years, there has been a massive decline in battery storage technology costs, along with generous incentive programs in states like California, New York, and Massachusetts.

In this session, panelists talked about some of the challenges of behind-the-meter energy storage – including financing and interconnection. From a financial standpoint, photovoltaic solar panels are a well-understood technology with mature contract language and proven financial models. But battery technology is newer, has a higher perceived risk, and may be harder to monetize, so it may take some time for the investment community to get familiar with energy storage technology and find ways to calculate return on investment.

In some ways, the innovation in energy storage technology is happening faster than the market rules and policies allow. Utilities and the industry need to develop new processes for interconnection and metering of energy storage systems while learning about new battery technology and software, and energy storage companies are asking for completely new processes in a relatively accelerated timeframe to keep up with customer demand.

We’re all in this together

Overall, at SPI there was an overwhelming sense of collaboration and cooperation between various solar industry segments: utility executives embracing community solar and energy storage; innovative energy storage models that incorporate electric vehicles; cross-company partnerships between commercial solar and energy storage installers to develop new models and new services for energy customers; and EV installers partnering with municipalities and businesses to install charging stations. Together, we’re working in an industry that employs more than 250,000 Americans to generate clean, renewable energy while delivering financial and environmental benefits for customers.