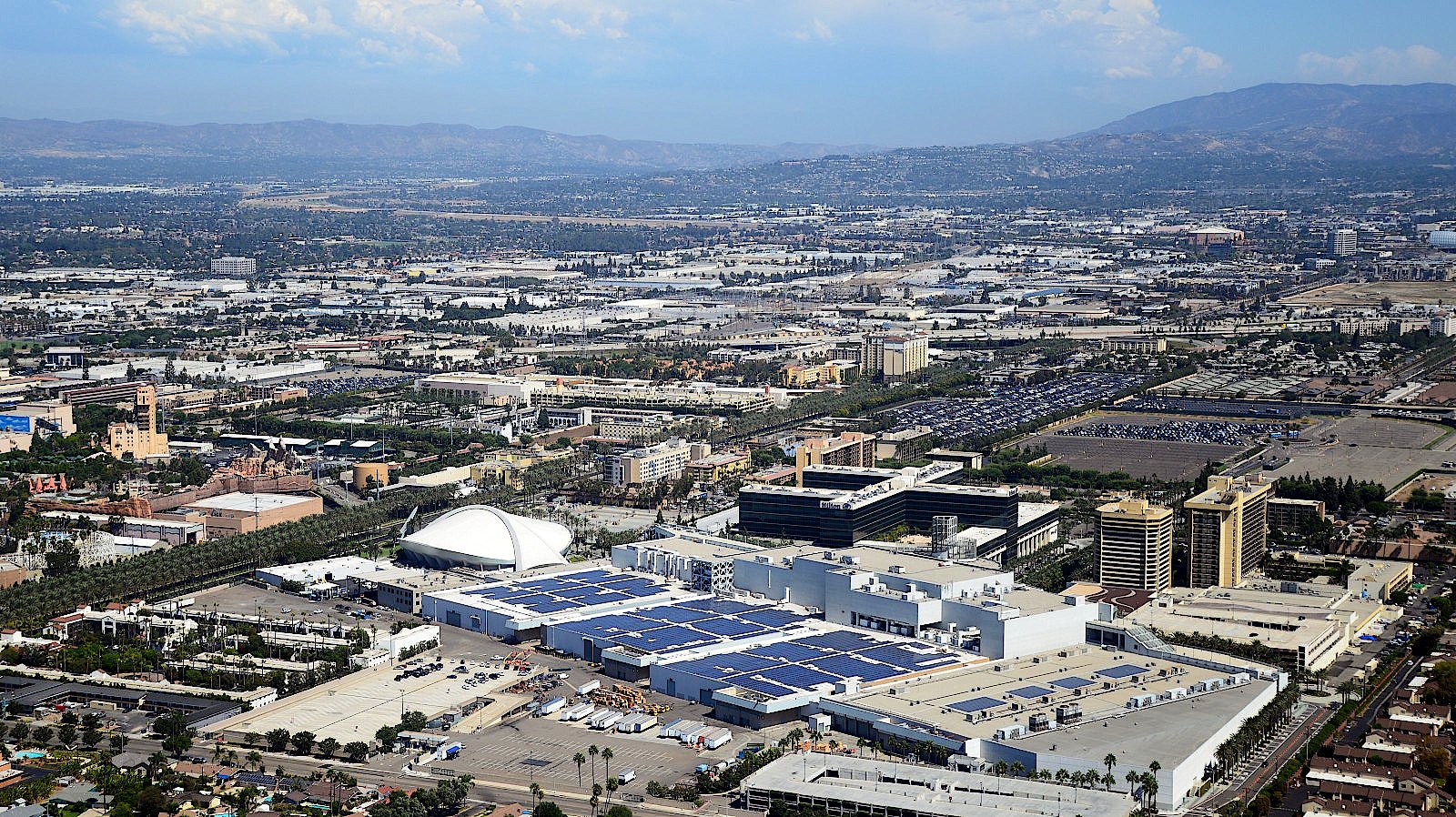 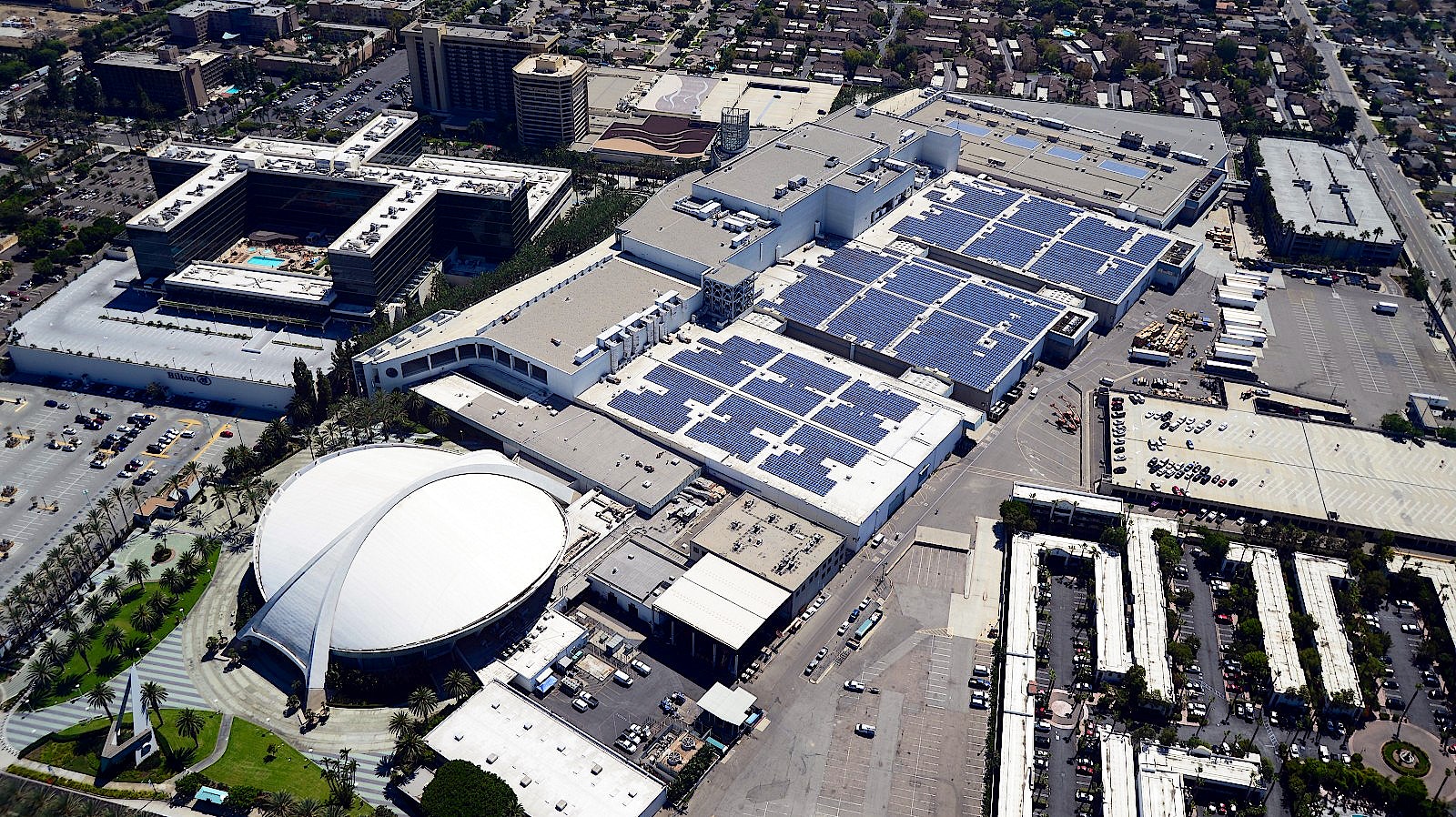 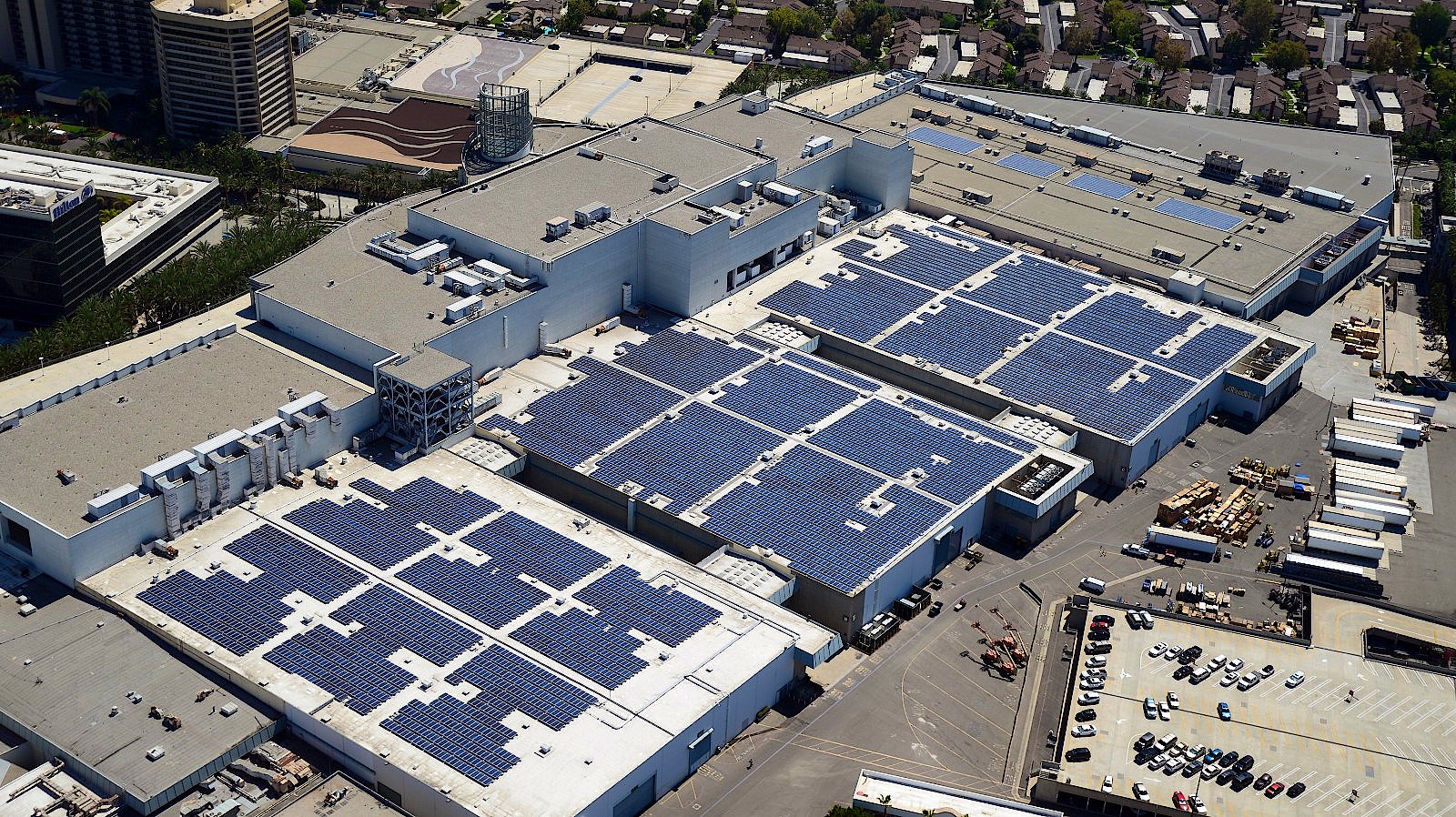 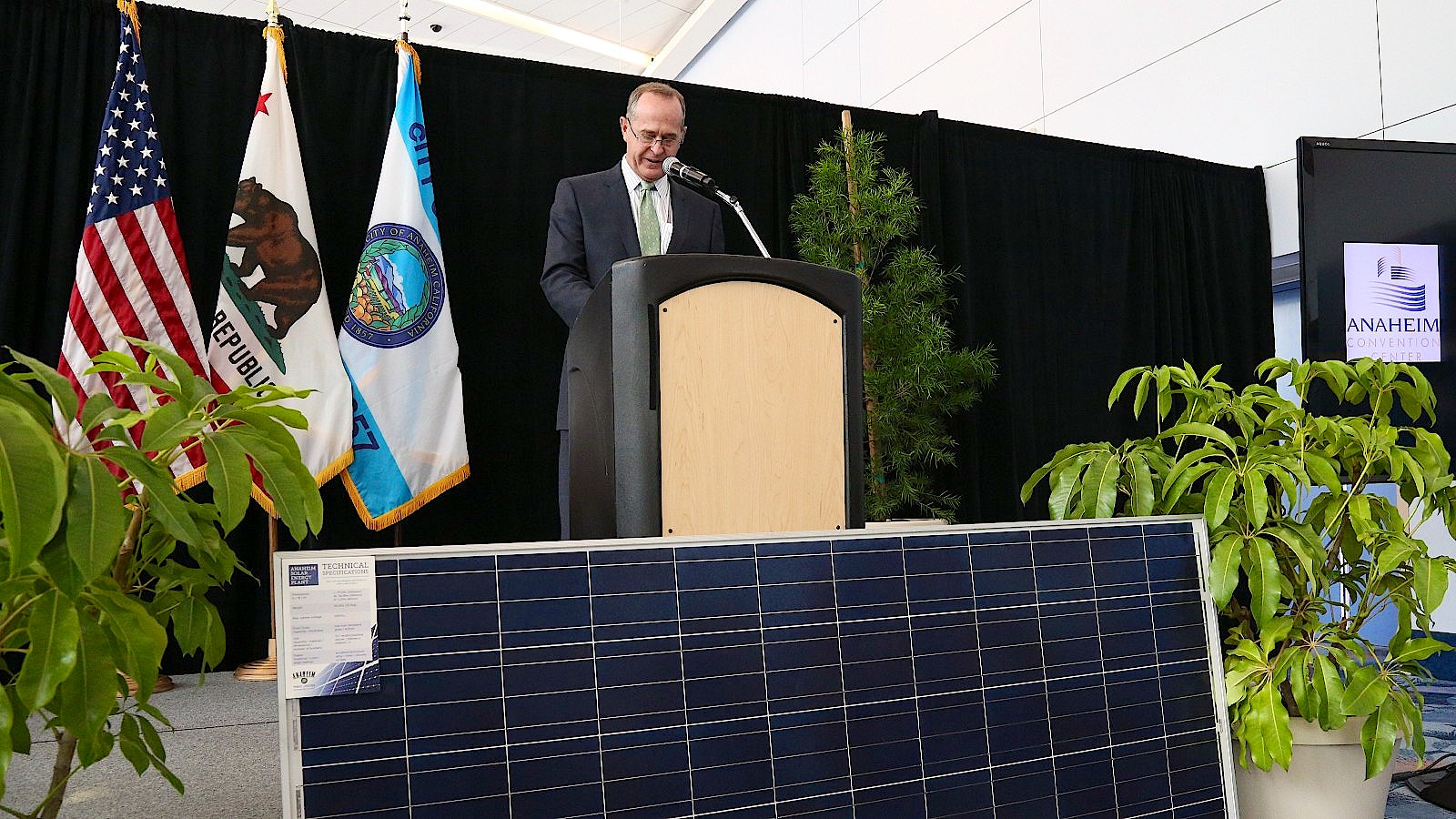 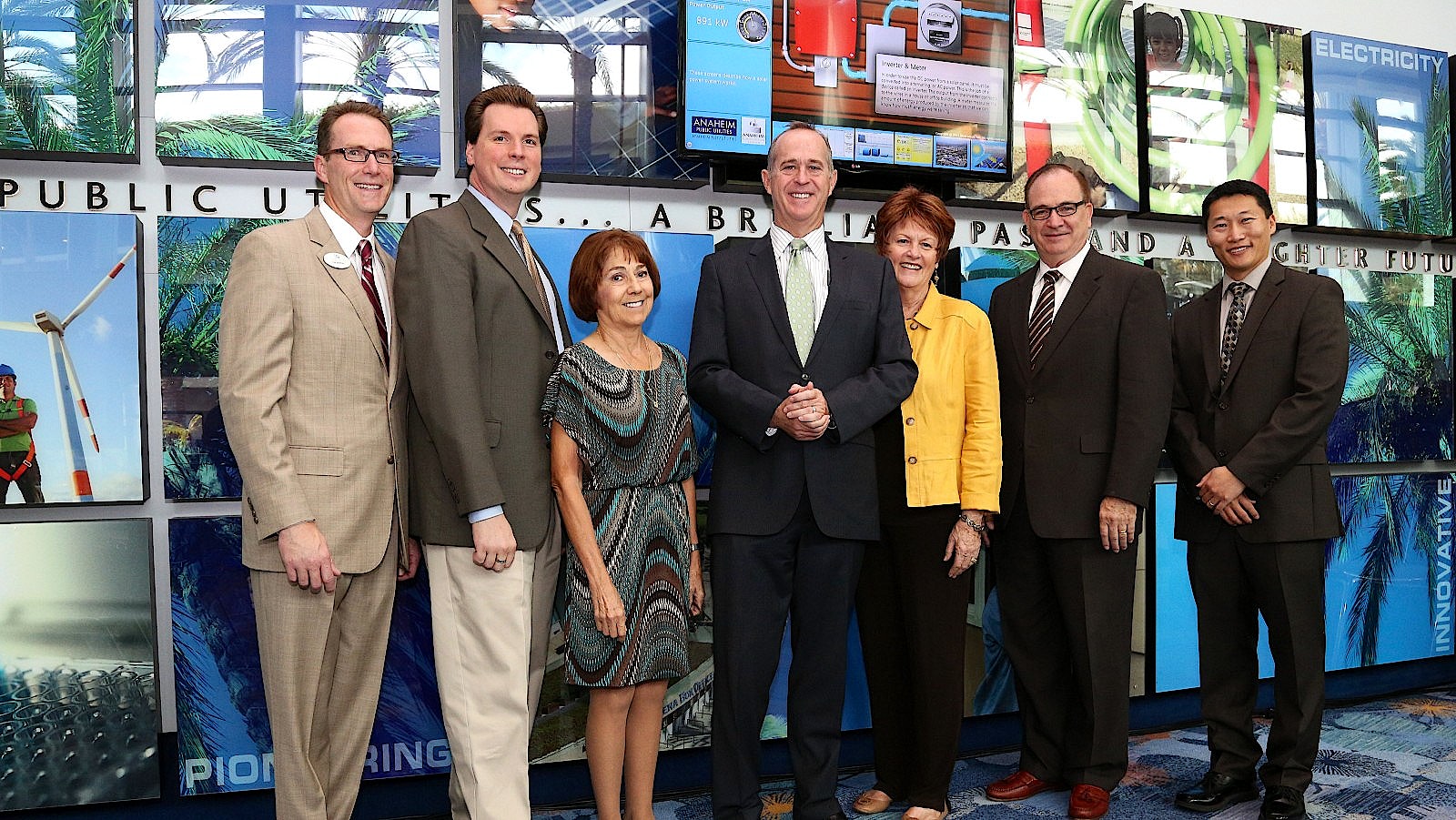 This 2.4 megawatt roof-mounted solar array, owned by Anaheim Public Utilities (APU) and the City of Anaheim, is built atop the Anaheim Convention Center’s Exhibit Halls A, B, and C. Excess energy will be fed onto the grid.

The Convention Center is a LEED-Certified facility that performed various energy efficiency upgrades before installing solar. It is the largest convention center on the West Coast hosting about 200 events a year. It continues to be in high demand, evident in the fact that is has undergone seven expansions.

The heavy amount of traffic from the 200 or so tradeshows and events posed the biggest challenge. Borrego Solar had to remain flexible while keeping the project on track. In addition to avoiding interfering with the Convention Center’s operations, Borrego Solar needed to manage a large crew and make sure they were successful in shifting workloads accordingly. There could be up to 60 people working on the roof at the same time, including electricians, medium voltage workers, trenchers, fencers, roofers and concrete contractors.

Borrego Solar’s project management team held weekly coordination meetings with Convention Center staff to discuss upcoming conferences and events. This allowed us to shift workloads from atop one exhibit hall to another if we knew an event was setting up or tearing down that week. Our crews were able to cross reference the short term challenges presented by the convention center staff with the long term construction schedule, and kept busy on site while having a minimal impact on daily operations.

Borrego Solar completed the 2.4 megawatt Convention Center solar project in four months, which is the time frame that was budgeted for and promised. The ability to deliver on our promises is the result of having the methods and expertise in place to deal with complications before they arise and is what influenced Anaheim Public Utilities to choose Borrego Solar as the Operations and Maintenance provider after a competitive bidding process.

The project furthers the City’s sustainability goals and helps APU meet its Renewable Portfolio Standard (RPS) mandates to procure 25% of its energy from renewables by 2016 and 33% by 2020. Installing solar on top of the Convention Center enabled APU to take advantage of unused,city-owned space for cost-effective clean energy generation while hedging against energy cost increases. Reliability is enhanced for APU by siting generation at a high demand facility and the Convention Center gains a powerful marketing tool to attract discerning event organizers.